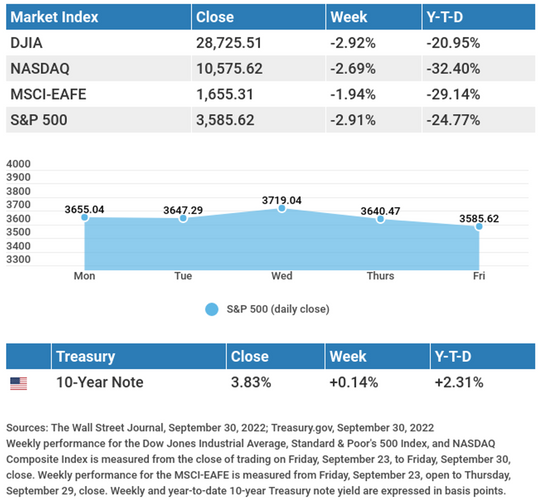 U.S. stocks were under pressure all week due to recession concerns and unsettled trading in the bond and currency markets. This stress followed economic steps out of the U.K. During the previous week, the Bank of England (BOE) raised interest rates, and its prime minister announced unfunded tax cuts that the markets interpreted as inflationary.

The Bank Of England Acts

Global bond and currency markets have been volatile recently due to global central bankers raising interest rates to combat inflation. Developments in the U.K. took center stage last week when the BOE announced it would be buying long-dated U.K. government bonds. Upending the financial markets was the previous week’s announcement of tax cuts by the country’s new prime minister, a step many investors viewed as counterproductive to the BOE’s inflation-fighting efforts.

Source: Econoday, September 30, 2022
The Econoday economic calendar lists upcoming U.S. economic data releases (including key economic indicators), Federal Reserve policy meetings, and speaking engagements of Federal Reserve officials. The content is developed from sources believed to be providing accurate information. The forecasts or forward-looking statements are based on assumptions and may not materialize. The forecasts also are subject to revision.

Source: Zacks, September 30, 2022
Companies mentioned are for informational purposes only. It should not be considered a solicitation for the purchase or sale of the securities. Investing involves risks, and investment decisions should be based on your own goals, time horizon, and tolerance for risk. The return and principal value of investments will fluctuate as market conditions change. When sold, investments may be worth more or less than their original cost. Companies may reschedule when they report earnings without notice.

“The trust of the innocent is the liar’s most useful tool.”

Tax Tip: With Shared Custody, Taxes Can Get Complicated

If you have a legal agreement with your child’s other parent regarding custody, you likely have questions about claiming the child on your tax return and what credits (if any) for which you are eligible.

* This information is not intended to be a substitute for specific individualized tax advice. We suggest that you discuss your specific tax issues with a qualified tax professional.

Mashed potatoes are a classic side at any meal, but they can be calorie-dense and don’t provide as much nutritional benefit as other veggies. If you want a tasty and easy way to incorporate more veggies into your meals this year, try this simple mashed cauliflower recipe:

Seven people stand in a square room which measures 30' x 30'. Each one can see the entire room and everyone in it without making any physical movement (aside from eye movement). Where inside this room can you place an apple so that all but one person can see it?

Last week’s riddle: Alexandra’s mom had four children. The first one was named May, the second was named June, and the third was named August. What was the fourth child's name?  Riddle Answer: Alexandra

Photo of the Week